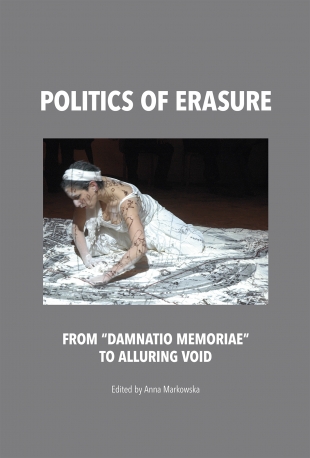 Politics of erasure from “damnatio memoriae” to alluring void

The book Politics of Erasure. From “Damnatio Memoriae” to Alluring Void on the one hand deals with the strategies of widely understood erasure in visual arts (i.e. exclusion, annulment and depreciation) in terms of particular works of art, museum narrations or urban spaces; on the other hand, it attempts to look at the ways of writing history because here the required and necessary virtue of synthesis sometimes transforms into an injurious scheme.
Thus, oscillation between the general consciousness of the method and its precise use within case studies becomes not only a presentation of significant works of the Polish art of the 20th century showed in the general European context, but also a reflection on the craft of the historian, its limitations and possibilities.
The “politics of erasure” in the title does not link only with the ruthless power struggle hostile to any signs of resistance, it can also be a strategy aiming at widening our perception or negotiating what is visible and real. In this last case it does not reconcile itself to the terror of the visible and becomes a persevering attempt to expand the range of imagination and activate memory and intuition.

Conferences and Studies of the Polish Institute of World Art Studies