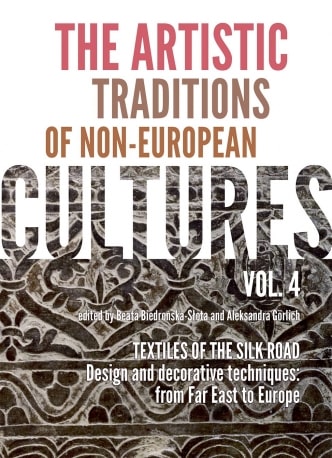 Silk Road is one of the most important trade routes connecting the Far East with the West. Stretched from Japan to the countries of Western Europe it also became one of the most important cultural exchange routes in history. It has been a subject of studies in various fields of research. Presented here are studies concerning textiles of the Silk Road.
Fifteen articles collected in the 4th volume of The Artistic Traditions of Non-European Cultures were presented at the international conference Textiles of the Silk Road. Design and Decorative Techniques: From Far East to Europe organized by the Krakow Branch of Polish Institute of World Art Studies and the Manggha Museum of Japanese Art and Technology. They are divided into four parts reflecting geographical and technical scope of their subjects: East Asia, Central Asia, From Central Asia to Middle East and Europe – Influences, and Technique and Tradition Throughout Asia. They are presented by art historians and experts of related disciplines from Poland, Ukraine,  Sweden, Germany, Italy, Turkey and Japan.
This publication is a collection of articles presenting traditions of various designs and decorative techniques spreading through the Silk Road from Far East to Europe, their connections and the way they developed. It also presents a condition of this heritage and its role in the realm of modern fashion and textile design.

Małgorzata Martini, Kumihimo: An Ancient Art or a Present–Day One? The Gifts of Mrs Midori Suzuki to the Japanese Art Collection in Krakow

Barbara Szewczyk, “How the Kimono Released Women from Corsets” – Japonism in Fashion at the Turn of the 19th and 20th Centuries

Anna Bielak, The Kimono as a Fashion Phenomenon in Modern Japan and Beyond

Joanna Bodzek, To [Mend] * A Reflection on the Lee Edelkoort Anti-Fashion Manifesto, the Kimono Reconstruction Project – My Personal Vision on How Mended Clothes Can Mean “Style” in the Future and How This is Connected with the Boro Textiles of Japan

Ewa Orlińska-Mianowska, Reception of the Orient in the Eighteenth-Century European Silk Industry

Marta Żuchowska, Transferring Patterns Along the Silk Road: Vine and Grape Motifs on Chinese Silks in the 1st Millennium AD

Astrid Klein, The Language of Kučean Clothing: A Comparative Study of Wall Paintings and Textiles

PART THREE: FROM CENTRAL ASIA TO NEAR EAST AND EUROPE - INFLUENCES

Kosuke Goto, The Celestial Lotus: On the Sources of Ornamental Patterns Woven in Silk Samite

Maria Ludovica Rosati, Textiles Patterns on the Move: Looking at the Iconographical Exchanges Along the Silk Route in the Pre-Modern Period as Cultural Processes

Beata Biedrońska-Słota, The Cross-Cultural Role of Textiles Exemplified by Textiles with Arabic Inscriptions and Some Other Motifs

Cemile Tuna, Silk Trade from Bursa to Krakow on the Silk Road

The Artistic Traditions of Non-European Cultures, vol. 4
Textiles of the Silk Road. Design and Decorative Techniques: From Far East to Europe