> Naukowe>World Art Studies>The Henryk Siemiradzki. That we do not know Powrót
0 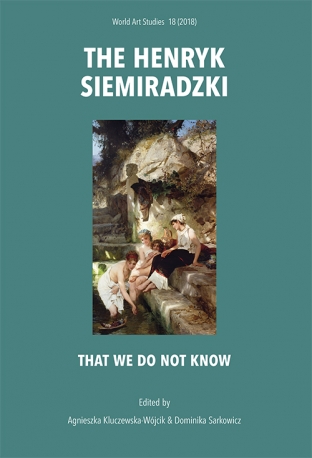 The Henryk Siemiradzki. That we do not know

In 2018 we celebrate the 175th anniversary of the birth of Henryk Siemiradzki (1843–1902), one of the most accomplished Polish painters. He was closely associated with Polish and Russian artistic circles, but spent most of his artistic life in Rome.

He came from a noble family in the formerGrand Duchy of Lithuania (now Belarus). He was born in 1843 in Novobelgorod (today Pechenihy), near Kharkov in Ukraine, the son of Hipolit Siemiradzki, a general of the Russian Army. Henryk Siemiradzki was connected with the Imperial Academy of Arts in Saint Petersburg (which he graduated in 1871), and with the circle of artists living in Rome, where he relocated in 1872. He was awarded and exhibited in the important art-shows; most notably his first taste of international recognition came in the 1873 World Exposition in Vienna, by receiving the ‘medal in art’ for his Christ and the Sinner (The State Russian Museum, St. Petersburg). Thereafter his art was subsequently shown and highly prized in future global world art exhibitions such as in 1876 in Philadelphia, in 1882 in Melbourne and, most significantly, in 1878 in Paris for his monumental Nero’s Torches (Candlestiks of Christianity). Thanks to his generous gift (Nero’s Torches), the first Polish National Museum was opened in Kraków in 1879. The painting Phryne on Poseidon’s celebration in Eleusis, purchased by the Russian Emperor Alexander III, began the collection of what is today’s Russian State Museum in St. Petersburg. After his death in 1903, Maria Siemiradzka, the painters’ wife, donated Christian Dirce that was then exhibited during a posthumous show at the Society for the Encouragements of Fine Arts Zachęta in Warsaw to the Society (today in the National Museum).

Siemiradzki had lived for nearly threedecades in Rome, where he displayed his works and took part in its artistic life. He was an active member of Academia di San Luca. In Rome he built his house and workshop at via Gaeta. It was visited by a wide variety of people that ranged from artists to just pure lovers of art. Ever since 1884 he spent his summers in his holiday home in his beloved Strzałków near Częstochowa in Poland in which he also passed away in July 1902. Siemiradzki was buried at the National Pantheon of Poland in the crypt of the church of Pauline Fathers’ on Skałka in Kraków.

As part of Siemiradzki’s Jubilee, the National Museum in Kraków, hosted a conference entitled The Henryk Siemiradzki that we do not know on 11th–13th April 2018. This volume contains material from this conference.

Experts presented theses on lesserknown aspects of Siemiradzki’s life and art, starting from his first artistic attempts in Kharkov and studentship at the Imperial Academy of Arts in St. Petersburg. A special section was devoted to his inspirations arising from his fascination with the Antiquity, the Middle East, paranormal phenomena, as well as books by Ernest Renan. Experts researched Siemiradzki’s place in Europe, his possible and visible links with the most famous Academicians - Alma-Tadema, Leighton, Fortuny, Gérôme. The artist’s oeuvre was analysed in the context of French and Russian reception. The second technological part, was entirely devoted to the complexity and variety of techniques in Siemiradzki’s paintings.

Jerzy Malinowski
The Henryk Siemiradzki that we do not know – introduction

Veronica Bogdan
Henryk Siemiradzki and the Imperial Academy of Arts

Vita Susak
Jesus and the Samaritan Woman (1890) by Henryk Siemiradzki in the Context of European Art: Variations on a Theme

Aneta Biały
Henryk Siemiradzki and the Circle of Spanish Painters in Rome. How and Why Siemiradzki – an Ardent Opponent of the Fortunists in Rome – became a Follower of Mariano Fortuny in the Eyes of French Critics in Paris

Wojciech M. Głowacki
“A Polyglot of a Paintbrush”? Critical Reception of Nero’s Torches in France

Kamilla Twardowska
Henryk Siemiradzki and his interest in the paranormal phenomena

Magdalena Laskowska, Monika Paś
Henryk Siemiradzki – works, memorabilia, documents. The history of the collection of the artist’s legacy in the National Museum in Krakow

Elena V. Nesterova, Sergey Sirro
Academic traditions in the art of H. Siemiradzki (on the base of technological research made in the State Russian Museum)

Yulia Dyakonova
Henryk Siemiradzki’s artistic process. Reconstruction of its initial stage – with the use of X-ray research (based on the collection from The Tretyakov Gallery)

Ksenia Zdzieszyńska-Demolin, Dorota Pliś
A multi-staged and passionate process of building and modifying compositions in Henryk Siemiradzki’s paintings in the light of analytical photography

Dominika Sarkowicz, Marzena Sieklucka, Anna Klisińska-Kopacz
The palette and characteristic features of Henryk Siemiradzki’s use of pigments in the context of the examination of two paintings of uncertain attribution