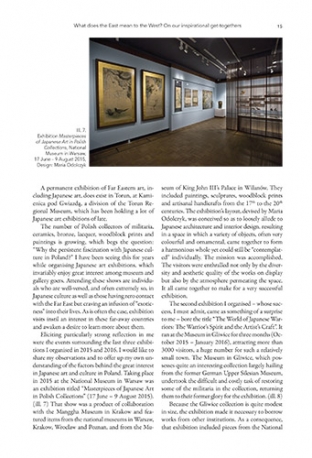 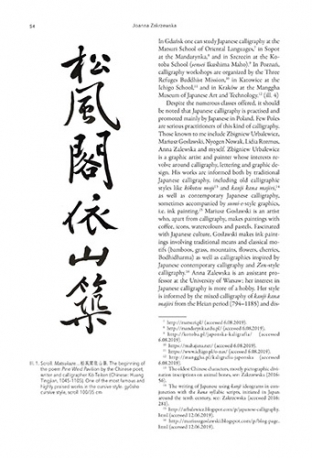 Poland – Japan. Contemporary Art and Artistic Relations has been prepared in connection with the international conference Jikihitsu. The Signature of the Artist. The Presence of Japanese Tradition in Contemporary Polish Art organised by the Institute of Art Education of the Maria Grzegorzewska University in Warsaw, the Polish Institute of World Art Studies and the Association of Polish Architects in Warsaw in 2019. The volume is consists of 28 articles devoted to the contemporary interpermeation and mutual influence of Polish (European) and Japanese culture.
The publication features reflection on the nature of Polish(European)-Japanese relations today in an era of worldwide mobility, globalisation, transculturalism, new media, and new communication channels. It examines the phenomenon of the unwavering (since the second half of the nineteenth century) European and Polish fascination with the culture and art of the Land of the Cherry Blossom, the contemporary meaning of Japonism and japonaiserie, as well as the inspiration and influence of Far-Eastern art, philosophy and religion on the creative process of contemporary artists (in printmaking, sculpture, digital media, dance, etc.).
Contemporary Polish-Japanese relations are examined through the prism of meetings, cyclical events, thematic presentations, exhibitions, festivals, artistic exchanges and residencies as well as the ongoing presence of Polish artists and their works in Japan or of Japanese artists and their productions in Poland in addition to traces of Japan in Polish museum collections. The context of works by selected Polish artists active in France in ‘symbiosis’ with Japanese art and culture is also an important topic of discussion.
There are also references to the eponymous jikihitsu, the artist’s signature, which we treat quite broadly – not only as the mark confirming an artist’s authorship of an artwork or a compositional element, but also as a kind of metaphor of one’s creative path or attitude, the mark of an artistic individuality gradually taking shape in the encounter with a different culture and tradition. Texts by several speakers from Japan, who talk about their fascination and points of convergence with contemporary Polish and/or European culture and art are also an important component of the publication.
The texts have been grouped under the following sections: I. Studies – papers by historians, art critics and theorists, shedding light on different issues at the cusp of European and Japanese culture from the latter half of the twentieth century to contemporary times, from the Japanese avant-garde to kawaii aesthetics; II. Institutions – statements by representatives of well-known cultural and art institutions dealing with the interpretation, archiving and popularisation of the legacy of Japanese art in Polish collections and building Polish(European)-Japanese relations in art (through the organisation of academic and artistic exchanges, residencies, workshops, festivals, concerts, exhibitions, lectures, etc.); III. Artists – this chapter comprising the testimony of artists/scholars from the perspective of their own experiences when visiting Japan (or, conversely, of Japanese artists in Poland) as holders of fellowships or artists-in-residence.
There are also testimonies of artists from other parts of Europe (e.g. Austria and France) who are contributing in a significant way to the vibrancy of European(Polish)-Japanese contacts.
It is our hope that the publication will make an important contribution to the debate on contemporary Polish(European)-Japanese relations in the realm of art.

Jerzy Malinowski
The centenary of diplomatic relations between Poland and Japan

Anna Katarzyna Maleszko
What does the East mean to the West? On our inspirational get-togethers

Anna Dzierżyc-Horniak
What one needs is concentration, inner silence, a willingness to listen Koji Kamoji in Artistic Dialogue with Polish Artists

Magdalena Durda-Dmitruk
Fragment of the whole: Traces of Japanese aesthetics in the silk works of selected contemporary Polish artists

Jerzy Uścinowicz
The New Temple of Saint Nicholas of Japan at the Kamennaya Gorka in Minsk, Belarus. The Near Tradition of the Far East

Radosław Predygier
The Polish Trail in Okayama: The Polish Art and Science Mission in Japan

Kazuhiro Korenaga
To Connect Region and People through Art

Rina Matsudaira
Inspired by the Classics of East Asia. Searching for a meeting place of narratives and paintings

Akiko Kasuya
Celebration: Between the Aesthetic and the Critical

Atsushi Hosoi
A report on the progress, development and background of the work of young Japanese wood sculptors today. And about my own work

Przemysław Radwański
The Artist’s Craft as Meditation: Zen Practice and the Creative Process