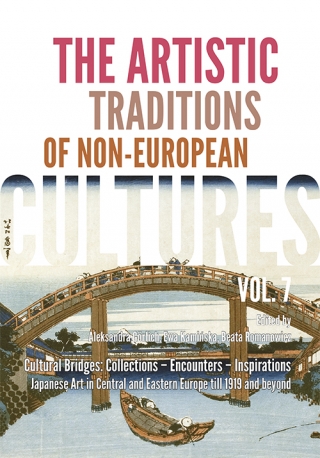 Cultural Bridges: Collections – Encounters – Inspirations
Japanese Art in Central and Eastern Europe till 1919 and beyond

This publication, which is a part of an ongoing project entitled “Collections – Encounters – Inspirations: Japanese Art in Central and Eastern Europe till 1919 and beyond”, commemorates the 100th anniversary of Poland’s diplomatic relations with Japan. The primary objective of this project is to promote inter-sector cooperation between universities, museums, associations, collectors and artists specialising in Japanese art and culture. Furthermore, the project aims to create a network for international cooperation among scholars exploring encounters between Japan and Central and Eastern Europe (from their first contact until now), including collections of Japanese art and crafts, the role of collectors and the reception of Japanese art and crafts in the latter countries.

Ewa Kamińska
Learning from Japan and inspiring the future. Feliks “Manggha“ Jasieński and the 100-year anniversary of diplomatic relations between Poland
and Japan

Krzysztof Kalitko, Joanna Kokoć
The unfinished journey. The hasamibako from the collection of the National Museum in Poznań

Estera Żeromska
The turn of the 20th century and the mosaic of the Polish-Japanese associations (religion, dance, theatre, literature, music)

Mirjam Dénes
A common heritage. Japonisme in the Austro-Hungarian Monarchy: a project report